At age 27, many a rock star has died. Hendrix. Joplin. Cobain. It’s the rock star curse. There’s something mysterious about 27 and burning too bright.

27 years ago, almost to the day, Adam David III was born. He longed to live up to his grandfather’s musical legend, and wondered if he’d ever get there.

SIGNAL Saga by Dominic Bercier, with inks by Craig Yeung — Busker at the Bullet Train Station [2018]

The year was 1991, I was in Grade 8, and he was delivered fully formed on a letter sized piece of white paper from my black inking pen. He has since been a dear friend, imaginary, as it were. My inner-inner-inner circle knew, and no one else. 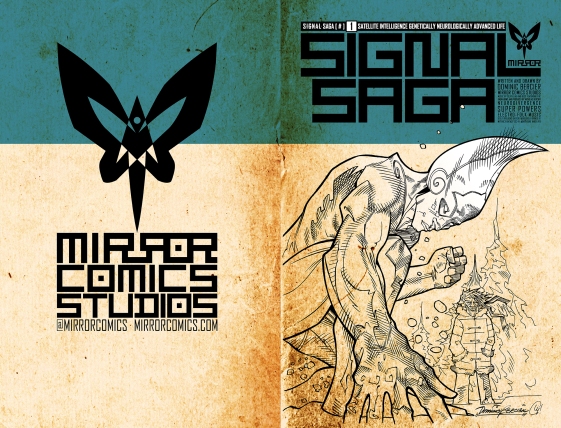 SIGNAL Saga by Dominic Bercier, with inks by Craig Yeung—Cover #1 [2018]

For myself, 27 was in 2004, and I nearly died then and there. I had been besought with the onset of bipolar disorder, and I was in spiritual and psychological agony.

I had just separated from my wife, and had moved back home. SIGNAL-related artwork covered the walls, sometimes even beyond the papers I’d taped to them.

Mania. Depression. Strange thoughts. Weird behaviour. And suicidal desperation. All these had been plaguing me for months, possibly years.

But I had made a bet with destiny, before I gave up…

I was so miserable that I’d lost all hope.

So, I dared myself to discover it anew—if it even existed…

I asked myself: “What if hope exists, only I cannot see it?”

And it returned. Not quickly. There was no parade or fanfare, but it did return in the end.

It wasn’t the end of the carnage and mayhem mental illness brought with it, but it did give me one thing—hope returned.

Everything that emanated afterwards was built on this hope.

A dozen new approaches were abandoned in the last decade alone. In 2015, I finally started drawing using a traditional approach.

I printed hundreds of custom grids on 11″ x 17″ cardstock and began to draw. 14 months later, I had 200 pages. Meanwhile, I perfected the story and sought out proper outlets.

SIGNAL Saga by Dominic Bercier, with inks by Craig Yeung—Wake Up[2018]

I decided the only way to see this through with my personal vision intact was to release it myself.

If the mysterious potential of Adam David III dies, then maybe its actual becoming will be his rebirth, or some sort of beautiful afterlife.

Time to raise my kid.

SIGNAL Saga by Dominic Bercier, with inks by Craig Yeung—Grandpa’s Been Speaking to Ghosts Again [2018] 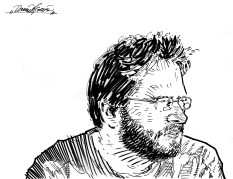 Classically-trained artist Dominic Bercier is the writer-artist-designer behind Mirror Comics Studios, a boutique comic book and graphic novel production and publishing entity from Ottawa, Canada. He produces stories of young heroes losing, longing, striving for and restoring the things they’ve lost, be they love, lives or souls, plunging characters into emotionally charged magical initiations that test their wits and their hearts. You can follow @DominicBercier, @mirrorcomics and @SIGNALsaga on Twitter or visit www.dominicbercier.com, www.mirrorcomics.com, and www.signalsaga.com.