Text reads: “However difficult life may seem, there is always something you can do and succeed at. It matters that you don’t just give up.” Stephen Hawking

It had been a few weeks since I’d been feeling a persistent sadness weighing on my heart. Unable to write and barely getting the essentials done, I found myself watching Hallmark movies. They’re like a chocolate so sweet, it makes your teeth hurt. When even When Calls the Heart failed to cheer me up, I just thought about the screenplay structure I’m supposed to work on. I daydreamed and felt like a big failure.

Anger got a hold of me—the frustration of having to work and live in isolation, compounded by the absence of the medical care I so badly need. I’m so fed-up of having to do everything alone, I could scream. So, I meditate, do Ho’oponopono, and calm down.

Then, on March 14, I learned of the passing of Stephen Hawking. I’ve always admired his spirit. He was living proof that other people’s opinions about him don’t matter. He was told in the ’60s that he only had a couple of years to live. So much for medical expertise when it comes to the complexities of the human condition! And so, this astonishingly brilliant mind has left humanity with a greater knowledge of our universe. But more importantly, he gave us the inspiration to keep on going and moving through our difficulties. In the above quote I found a wealth of knowledge beyond the confines of space and time. It speaks to the spirit: “However difficult life may seem …”

Although the occasional pity party is understandable, illness is not an excuse for giving up on yourself or your dreams. I’ll never be a horse breeder/rider/teacher again, but I have other dreams to give me wings. There is a multitude of emotions that can drive sadness and anger away if I reach out, touch the sky, and focus on what is possible.

“[There] is always something you can do and succeed at.”

I love to write, so I will myself to do it for no other reason than for the joy it brings me. Happiness, whether you “find” it or not, will always disappoint. You don’t have what you want? You’re disappointed. You have what you always wanted? Disappointment awaits; that’s human nature. True joy does not depend on outside circumstances. That’s why there is always something you can do and succeed at. Will I be a fairly successful author? Will a producer option my screenplay? I don’t know the answers to those questions, but I do know that lasting success is measured by the joy I feel inside and share with my fellow humans, if only by giving a smile or an encouraging word. That is a success that cannot be taken away.

“It matters that you don’t just give up.”

If you have any doubts about the veracity of this luminous statement, then get to know Stephen Hawking through his work and his life. He found his bliss in the mysteries of the cosmos and became an accomplished explorer of the final frontier, as the fellow Trekkie in me would call it. Yes, he was a successful teacher, writer, theoretical physicist, lecturer and a celebrity to boot, but that is not why we should heed his greatest lesson. He exemplified joy because it lived inside him. He was successful at simply being human. In every picture I’ve seen of him, I couldn’t help but notice his strikingly luminous blue eyes, exuding abundant joy.

It matters that we don’t give up, because we are all beacons of Light and together, we hold the universe in our heart and can outshine any star.

Thank you, Dr. Hawking, for inspiring so many of us to boldly go where our dreams take us and to relish in the journey. 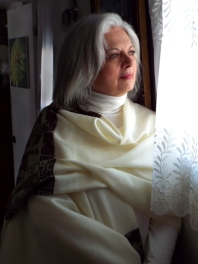 A trained psycho-social counselor and life coach, (and author of Higher Maintenance, published in 2016 by Balboa Press) Marianne Granger’s commitment to helping people led her to work as coordinator of a volunteer center, and years later, as director of a large food bank. While managing and training employees and volunteers, she wrote and edited promotional and fundraising material. Her love of reading, writing, and cinema lead her to study screenwriting, which culminated in a completed feature-length screenplay. In 2001, she was struck down by a mysterious and devastating chronic illness that eventually became the inspiration for her book. She lives with her husband in southern Canada.