One of the events I attended for Pride this year was the latest iteration of Toronto’s edition of Naked Boys Reading. When I arrived, one of my friends who works at the venue innocently asked me if I was going to be reading. And without missing a beat, without even thinking, my response was to declare that no one wanted to see that. He scrunched up his eyes quizzically, as if I had somehow uttered some ridiculous non sequitur. That reaction, as well as how easily the self-deprecation fell from my lips, have stuck with me in the week or so that has followed, and I’ve been working at peeling back the layers to get at whatever truths are buried within.

At 37 (I’m 54 now), I was diagnosed with synovial sarcoma in my left knee. It’s a very rare soft tissue cancer. My chances of winning a lottery were actually better. By the time they found it, my knee was completely compromised. After a five week course of radiation, an incredible surgeon removed the joint and about a third of my thigh muscle, saving the front face of my kneecap, and replaced it with a prosthetic joint. He moved a part of my calf muscle to replace the missing part of the calf and then covered it with a skin graft from higher on my thigh. The leg was immobile in a splint for three months and then I spent nine months in physio, four of them at two hours a day for five days a week, to learn how to walk again.

One year after that surgery, they found eight tumours in my lungs. After in intensive course of chemotherapy, it took three surgeries over the course of the next two years to remove all of the tumours, and the last surgery cost me the lower lobe of my left lung. It took two more surgeries to get the leg to its optimum state. 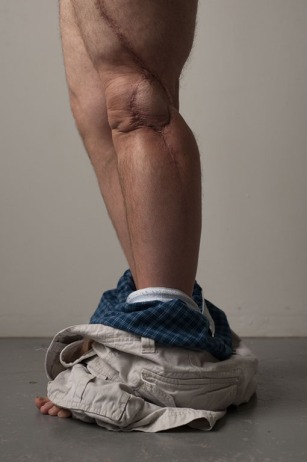 Which is a roundabout way of explaining that I have scars. The one on my left leg winds its way from my hip to the middle of the outside edge of my calf. The skin graft on the outside of my knee is oval of pebbled skin, set deep in folds of skin where all the edges of the surgeon’s creation were stapled together. The knee hyperextends back slightly, where the prosthesis locks so it can bear weight. There is also a thick, pink line down the middle of my chest, nestled in the ever greying hair. And, on my back, under my left shoulder blade is a pale white curve, a ghostly crescent where  that missing part of my lung escaped, taking the last of the cancer with it.

At one of my appointments with my surgeon, he said to his trainees, “When we see this cancer present in this way, we don’t often see a good result.” For any of you that don’t speak Doctor, that translates to: I honestly thought he was going to die. The survival rate for metastatic synovial sarcoma is around 5-10%.

I’ve had a complicated relationship with my body as long as I can remember, always picking apart the various parts that don’t meet my expectations or demands. And cancer has only added a whole new layer of complication. There were times when I swore I would never wear shorts again; I would be too embarrassed or ashamed. There were times when I felt this amazing relief because the pressure to be perfect was off. No matter how I tried, I could never be perfect, that pressure was gone. I’ve posed nude for photographers, wanting to see myself as part of something beautiful, as art. And I’ve wept at how I looked in those pictures, both from sadness at my size and my cellulite, and from the realization that, if it had been anyone else in those photos, I would have thought they were beautiful.

My scars are badges of honour, they are medals I earned on a battlefield of poison and radiation and scalpels. However, I still am conflicted. I am still sensitive about the hyperextension of my prosthetic knee, but I have also ever so slightly trimmed my chest hair away from my chest scar to make sure it is visible. And I wear shorts as often as I possibly can.

Would I pose nude for another photographer? Yes. There is control there. I am an object caught in light and an artist’s eye. I’m removed, distanced from my own nudity. There is one photo that I love. It’s a side view, from the lower edge of my stomach to mid-calf. The head of my penis is visible, and my hand is cupped on my ass. The line of the scar is the centre of attention, every curve and tiny dot where the staples and sutures pierced my flesh. I think it’s an incredibly beautiful image. Raw and erotic, yet proud and somehow innocent. I want to show it to everyone, and I have to stop myself because it is so bare, so exposed. But, I cherish it.

Since my friend made that comment to me that night, I have had my hands deep in the muck of my own fears, my own insecurities about my body. Would I do a nude reading? Well, first off, I haven’t been asked. And, honestly, I don’t know. A part of me would love to represent for the big-boned boys. And a part of me is scared to be that exposed. And that makes another part of me want to do it, just to show that I’m not scared. Because I’ve already been through the worst experience of my life, and how bad could anything else be?

So, would I do it? Ask me again later. 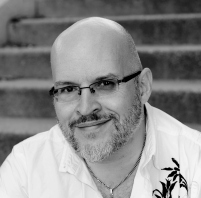 Born on the prairies, Stephen Graham King has since traded the big sky for the big city and now lives in Toronto. His first book, Just Breathe, tells the blunt, funny, and uncompromising story of his three-year battle with metastatic synovial sarcoma. Since then, his short fiction has appeared in the anthologies North of Infinity II (Pas de Deux), Desolate Places (Nor Winter’s Cold) and Ruins Metropolis (Burning Stone). His first space opera novel, Chasing Cold, was released in 2012, and the first book in the Maverick Heart series, Soul’s Blood, came out in 2016. The second, Gatecrasher, was released in 2017. He is currently working on the next in the series, A Congress of Ships.

One thought on “On the Body” 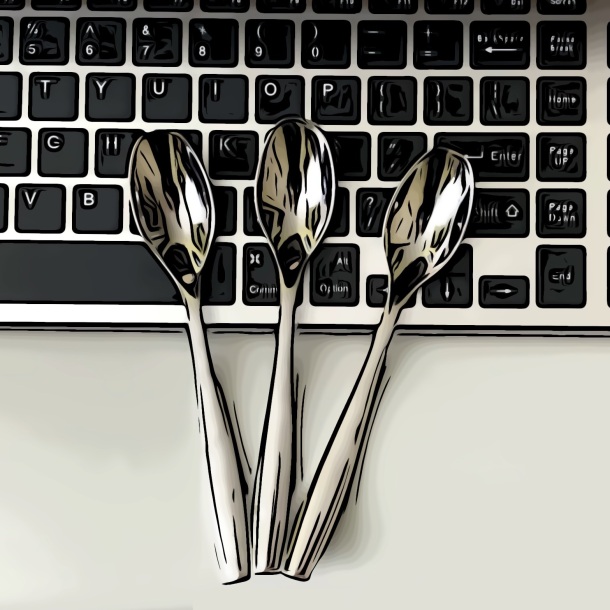