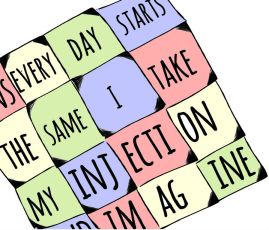 I had thought I would eventually stop writing poems.

I only started writing them in the first place to quiet the words in my head that needed to be free, and wanted air so they could thrive. When I was struck with Multiple Sclerosis in 2013, I could only write a handful of words at a time. I stitched these words together, sort of like a literary patchwork quilt, to form a poem.

For a few months, the poems became my voice. I saw the world through my writing; I lived through my words. The poems were a way to keep the words and the stories that wanted so desperately to be told at bay. They were my lifeline.

When I started to heal, I began writing a novel again. I figured that was it for the poems and I would switch back to writing novels completely, not matter how slowly I typed. However, the poems had other ideas.

They became more than a way to observe the world around me and how I interact with it. The poems became therapy for me. During the beginning of my healing, my memory was horrible, so the poems helped me remember conversations I had had or other things I wanted to remember. It was as if they were mental snapshots caught in words.

They usually involved some sort of conversation. I had never seen dialogue in poems but I am a storyteller by trade, so there would be dialogue in mine. They would tell a story, even if it was just a moment from my life. The poems were difficult to write as they were just me on the page without the smoke and mirrors of fiction. They were part memoir and part journey towards a new lease on life for myself.

As I continued to write poems, they became even more therapeutic. I wrote about past relationships, friendships that had faltered, family members I haven’t spoken to for years. I wrote about my sexuality, my disease, the disability I was born with, and the beginnings of new love. The poems helped to shed a different light on those issues, giving me angles to look at that I hadn’t considered before.

Now my fourth poetry collection, Living Beyond the Waves, is available. As I look back at the four collections of my poems, it’s as if I’ve made four patchwork quilts, each one of them dealing with an aspect of my healing, of my life.

They started as the path to find my voice. In the end, the poems became the way in which I found myself, one word at a time. The poems gave me my voice back. Now they let it sing. I don’t just write poetry, I’m compelled to.

Of Needles, Pills and Spoons

Every day starts the same.

I take my injection and imagine

that it is filled with light

I look at the clear liquid

and try to see sparkles within.

As the needle enters my skin,

I picture it filling my body

with the sweetest of songs,

a lilting melody that is left over

from my dreams the night before.

When that is done, I take out

my pill case. Inside are a multitude

of pills that I take each day.

I look down at the multi-coloured shapes

and, as I take each one,

I look at them not as more mediation,

but magic given form and shape.

As each one slides down my throat,

it releases its magic inside of me,

filling me so full with glitter dust

that it has no choice but

to shine out from me.

Then I look at the jar on the mantle.

It is filled with the number of spoons

that I get that day. The number can

increase or decrease, depending on

how strongly the sparkle filled injection

and the magic pills are working,

how strong my body is, or how strong

the symptoms are that reside within me.

Sometimes, there are seven or eight,

other times, there are only three or four.

A few times there have been ten or eleven.

Each spoon is a different shape;

some are smooth and shiny while others

are heavy antiques, blackened and waiting

for my fingers to clean them until

they can shine once more.

I put a spoon aside for each task

that I have to do that day.

When I am out of spoons,

I know it is time to rest, to recharge, to regroup.

I am thankful for my life

of needles, pills and spoons.

I have had to learn the hard way

that every day is a new journey

and a chance to start again.

Every night, when I go to sleep,

I wonder how many spoons I will get

the next morning after I take my needle and pills.

When I finally do fall asleep,

it is to a soft, lilting melody

that I can only hear in my dreams.

You can get Jamieson’s newest book, Living Beyond the Waves, by clicking here.

Jamieson is an award-winning, Number One Best Selling Author of over sixty books and writer of Two Steps at a Time, a blog about having Multiple Sclerosis and Cerebral Palsy. He is an accomplished artist who works in mixed media, charcoal, pastels, and oil paints. He is also something of an amateur photographer, a poet, a perfume designer, and a graphic designer.

Jamieson currently lives in Ottawa Ontario Canada with his cat, Tula, who is fearless.

We’re writers and authors who also manage disabilities, states of being, and/or chronic conditions. This network is to educate and encourage and to share experiences and our love of words. Please contact us if you’d like to be a guest contributor or a featured author on our blog!!

Disclaimer: The articles in this blog and opinions expressed in the podcast, on videos, or during events or are not substitutes for medical or legal or other professional advice. The views, thoughts, and opinions expressed in the blog or podcast or on our YouTube channel belong solely to the author/guest, and not necessarily to the management team of the Spoonie Authors Network.

We at the Spoonie Authors Network condemn white supremacy and the systemic racism that upholds it, and we want to continue to be a safer place. We welcome disabled and/or autistic BIPOC creatives (and/or those who manage chronic conditions) to submit articles to us or request to be interviewed or to be part of our events.

The Spoonie Authors Network is a Dynamic Canvas Inc. community initiative project, in support of the written word of creatives who manage spoons.